A Woman sat high on a rocky ledge overlooking a pristine lake. It was her favorite spot, but today her heart was heavy. Her husband had been laid off from his job and had been unemployed for many months. They'd been praying, and he'd done lots of job hunting, but nothing had come of it so far. They seemed to be at an impasse.

Along the opposite side of the lake, a freight train approached and passed along the shore. It was perfectly reflected in the water, down to the last detail. As the woman watched the original and its reflection move along together in unison, she began to feel how impossible it was for the reflection to stop while the train kept going! Suddenly she knew that this was true for her husband as well. His life could not be at a standstill, because man as God's likeness reflects Him, including His activity. Speaking of God, Mary Baker Eddy writes, "Mind is the source of all movement, and there is no inertia to retard or check its perpetual and harmonious action" (Science and Health, p. 283). There is nothing that can check man's activity, because, as God's reflection, man is inseparable from Him. There is no counterforce, because God is One and All. 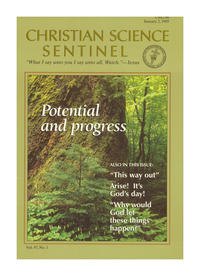