The Zulu word Sekunjalo, meaning "Now is the time," was the headline in a daily newspaper after the Transitional Executive Council was formally recognized by the South African Parliament. This council replaced years of white minority rule in preparation for elections by all the peoples of South Africa and the installation of a government of national unity, which has now begun to govern.

The word Sekunjalo tasted very, very sweet to millions of black people like me who had never before voted in a political election. In South Africa, as in the Middle East, Bosnia, and Somalia, people have been surrounded by violence, war, fear, uncertainty, anarchy, and terrorism. With the end of the old order, some are mistaking freedom for license or are so opposed to political change that they resort to extreme means to resist. During a transitional period, because self-discipline has not replaced government-imposed discipline, some lose control of their actions. There is intimidation by gangs seeking either political or personal gain; crime, hatred, envy, fear, and greed seem to prevail. 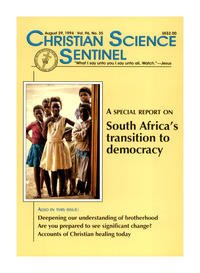