As was true of the disciples, whether we leave our nets or cast them on the right side, our consecration to good enriches our lives.

When Christ Jesus invited people to discipleship, he was pretty direct. Matthew's Gospel tells us he approached Peter and Andrew, two brothers who earned a living by fishing, and said, "Follow me, and I will make you fishers of men" (4:18–22). Father down the shore, he spoke to James and John. All dropped what they were doing and followed the Master. Jesus called Matthew the tax collector, with a similar invitation, and the book of Matthew records, "He arose, and followed him" (9:9). As John reports it, Jesus asked Philip, too, to "Follow me" (see John 1:43).

Some Bible scholars point out that these men probably were not strangers to Jesus. And Andrew had earlier been a disciple of John the Baptist. So when Jesus said, "Follow me," they were ready. 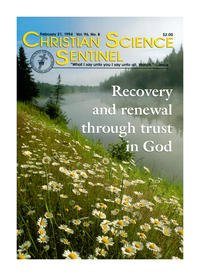