In business it's surely hard to succeed when the competition has its employees off the books or wins contracts because of an agreed-upon kickback rather than merit. A salesman complained the other day that his firm had developed some good, competitively priced products, but because of the personal relationship a competing firm had established, a leading retailer wouldn't even look at his line. In another instance a businesswoman was upset because she could see that others in her company were setting her up to take the blame if a project failed.

What do we conclude? Business is a dirty word? It's the arena where goodness is weakness? Christians get out? No way! For one thing, when one looks at the entire business universe, there is much that is noble, unselfish, progressive, and good. This doesn't get portrayed in the movies, but business is often a vehicle of grace, meeting the needs of mankind. And anyone engaged in business can participate in the demonstration of God's grace each day. 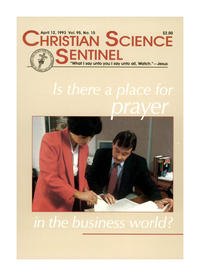