The right to be alive

Recent years have brought an important debate squarely into the public arena. It's a troubling social and ethical issue without easy answers. Courts and legislatures are wrestling with its implications and how to deal with them. Yet reports seem to indicate that more and more people are seriously considering the so-called "right-to-die" movement, along with its attendant practices of assisted suicide and euthanasia, to be a viable philosophy today. (This is explored from the perspective of one individual's personal experience and prayer, in the article beginning on page 24 of this issue.) As modern medicine has developed advanced technologies for prolonging human life, even though at tremendous expense, many have begun to question what's left of the real dignity and value of such life when the individual may remain bedridden, attached to highly intrusive life-support mechanisms, and in constant suffering or a medicated stupor.

People naturally want to have dignity. They want to know that their lives have some meaning and continuing value. They want to feel that they have a measure of control over their own lives and over what is done to their own bodies. And, at the same time, they want an effective means of overcoming suffering, disease, and limitation. These are all rights that everyone should be freely entitled to. But the right to die actually implies the right to be destroyed; and there must be—as people feel in their hearts—a better solution.

Send a comment to the editors
NEXT IN THIS ISSUE
Article
Of wars, reconciliations, and brotherly love 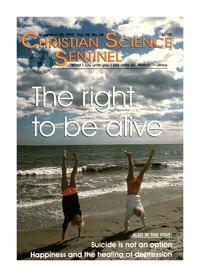