This week's Sentinel features an editorial by Nathan Talbot. Many of our regular readers may already know that this marks Nate's final contribution in his role as Senior Executive Editor. Fittingly, the title of his piece in the closing week of 1992 is "Looking ahead."

Nate is a longtime friend and colleague. We've worked together closely during several periods over the past twenty years. And when Nate agreed last February to help out with the religious periodicals of this Church, he had only one request—that I would consider the possibility of a shortterm assignment, a "temporary tour of duty," so to speak. He had already made plans to return to his native Idaho with his wife, Margie; in fact, they were just finishing a house they were building there. Nate's desire was, and is, to devote his full time to the public healing practice and to teaching Christian Science. Yet, as always, he has willingly given himself to the task at hand, and we've been able to enjoy and be inspired by his writing, and to have his unflagging support as a skilled editor, for the last ten months. 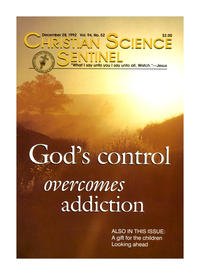