We can prove for ourselves the power of prayer over superstitious beliefs and practices.

The word occult means "hidden, concealed," and as it applies to occultism, it refers to the centuries-old belief in hidden evil powers. Occultism includes all beliefs and practices outside of human reason or God-premised faith and understanding, including black and white magic, Satanism, demonology, numerology, voodoo, astrology, and palmistry.

Some people dabble in the occult with a certain fearful fascination or, because they are ignorant of God's omnipotence, they think occult practices can do good. Others are simply curious. There are those whose character is so depraved that they seek from the occult the ability to harm others. And then there are those who, from a feeling of inner emptiness and poor self-esteem induced by society's aggressive materialism, open themselves up to occult influences. 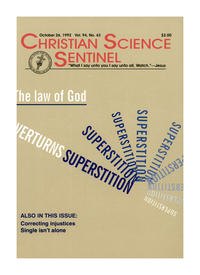