It was the last day of a three-day course in white-water kayaking. There were ten of us in the class. In the bus on the way to the river, people began sharing details of their careers. One woman informed us that she was a nurse anesthetist. When asked what exactly that meant she said simply, "I put people to sleep."

A few days later I was on another kayaking trip. Three of us were in kayaks, and a larger group was following us in rafts. While in the midst of a particularly challenging set of rapids, I took a stroke that was meant to stabilize my boat. As I pulled back I felt and heard a very pronounced snap in my back. I was frightened because I found I had very little control of my arms and upper body. I was incapable of directing my boat, so I let the current run me through the next section of river and was able to run aground on a small beach. 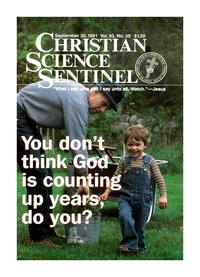