Although I had attended a Christian Science Sunday School...

Although I had attended a Christian Science Sunday School periodically during my childhood, I did not embrace the teachings of this Science until I was an adult. Before the latter occurred, I unwisely married a man who turned out to be violent. The marriage ended when I became pregnant.

At the time I turned to Christian Science, I had been divorced for several years and was going back to school. My life lacked fulfilling companionship. During the next several years I joined a branch church and The Mother Church and experienced much spiritual growth. However, a stable and lasting relationship somehow eluded me. 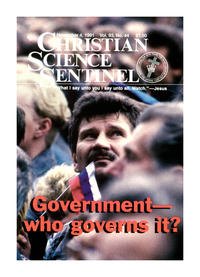