As a student, I liked art history and was especially intrigued with great religious masterpieces. It was interesting how the concept of holiness was variously depicted. Sometimes a gold nimbus or halo around the head of a figure indicated that this individual was holy. Or a prayerful position of the hands and an almost trancelike facial expression would suggest an exalted state. As remarkably beautiful as many of the works were, it was hard for me to relate to these saints and holy people. They seemed so otherworldly, remote, unreal. Whatever this holiness was, it didn't seem to have much to do with the world most people lived in. In fact, their state of holiness didn't seem too inviting to me!

Everyone's perception of holiness is not necessarily like that depicted in early religious paintings. Yet the term holiness seems more and more to be reserved for describing some condition of super-piousness that no ordinary person could attain. Holiness isn't exactly a topic that pops up in everyday conversation, either. But it must be important because throughout the Bible the call to be holy reappears, as though it is vital to our very existence. 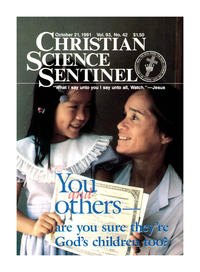