Late in June 1984 our son woke on a Saturday morning feeling...

Late in June 1984 our son woke on a Saturday morning feeling ill. By that evening he was feeling much pain in his neck and finding it difficult to breathe and swallow. A Christian Science practitioner was called for help through prayer.

Throughout Sunday and into Monday there was swelling and he was feverish. The next morning his father wished to have a diagnosis, after observing the difficulty our son was having in breathing. The doctor gave a preliminary diagnosis of mononucleosis, and blood tests were taken. He said that there is no medicine to cure this disease, but he offered painkillers and a medication for the feverish condition. Our son chose not to take these. The official results of the blood tests were to come from the laboratory later. 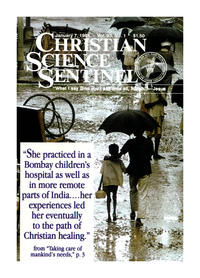