Not another step without the Psalms

Released from a labor camp after serving a thirteen-year sentence, Soviet dissident Anatoly Shcharansky flung himself into the snow and refused to continue when his escorts tried to confiscate a book of the psalms from the Bible. In an interview he recounted, "I said I would not leave the country without the Psalms, which helped me so much. I lay down in the snow and said, 'Not another step.' " And he also commented, "Without religion I could not have withstood all that I suffered." The New York Times, February 13, 1986 .

In times of trouble many people are willing to pray and seek help from God. Whether or not they are students of the Bible, they may be aware of Biblical characters who prayed—Jacob and Daniel in the Old Testament, for instance, and Peter and, of course, Christ Jesus, the best example, in the New Testament. In fact the Bible is itself a record and result of prayer and of man's desire to seek God's presence. 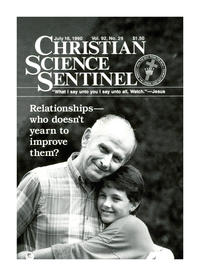