One afternoon my young son came home from school with a...

One afternoon my young son came home from school with a note saying he was believed to have impetigo, a contagious skin disease. At that time we lived in a country where the law requires parents to take a child to a physician in such circumstances. The doctor in our neighborhood confirmed that the condition on my son's face was impetigo, aggravated by hay fever. He prescribed some medicine. I told him that we were Christian Scientists, had never used medicine before, and would like Christian Science treatment for the case.

The doctor was respectful and asked how my son would be healed in Christian Science. The healing, I explained, would come through earnest prayer based upon a spiritual understanding of the boy's relationship to God.

Send a comment to the editors
NEXT IN THIS ISSUE
Testimony of Healing
I have always been grateful that I was raised in Christian Science... 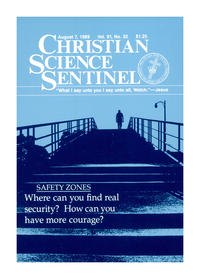