Alcohol, cigarettes, drugs—they never deliver what they promise. They just rob us of self-respect and health. Real satisfaction and happiness come from God.

While watching the National Basketball Association play-offs, I saw a lot of beer commercials. Two that were aired often had these slogans: "It's as real as it gets," and "Come, taste the high life." Many years ago I would have been a dutiful listener and gone to the refrigerator during the commercial for a cold one! But this particular evening, as I listened, the commercial instead turned my thought to God.

A beer commercial turning one's thought to God? How was that possible? Well, since my study of Christian Science began several years ago, my greatest thirst has been to know God better. And this understanding I have gained of Him through the study of the Bible and of the Christian Science textbook, Science and Health by Mrs. Eddy, has given me the greatest satisfaction I have ever experienced.

Send a comment to the editors
NEXT IN THIS ISSUE
Article
Dead end or new view? 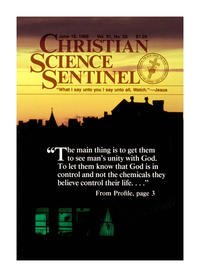