My brother and I were enrolled in a Christian Science Sunday School...

My brother and I were enrolled in a Christian Science Sunday School after my brother's healing, which took place when he was five and I was seven. My mother had sought many ways and medical means to free him of a recurring and stubborn cough that had troubled him and concerned the whole family since his babyhood. A relative suggested she try Christian Science. A Christian Science practitioner was called to pray for my brother, and he was healed.

Christian Science is a very precious gift. I recall in my teen-age years the joy of proving the statements of spiritual truth discussed in my Sunday School classes. While I had loved this teaching, it was not until I was having difficulty meeting academic standards at school that I realized Christian Science was directly relevant to my immediate needs. 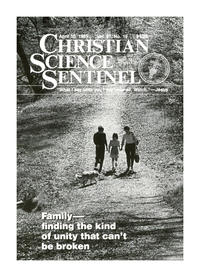