God's government: justice for all

We don't have to feel helpless about seemingly hopeless political and civic situations. The power of prayer can solve any problem.

Exploitative big business, intrusive bureaucracy, political wheeling and dealing—sometimes it seems as if the "little guy" is a victim of overwhelming forces against which he is virtually helpless. In circumstances such as these, it's natural to ask if there isn't some higher power to which we can appeal. The teachings of Christian Science affirm that, indeed, there is—the power of prayer.

In civic affairs, where rhetoric is rife with unrealistic promises and where political bargaining sometimes generates unwise public policies, the power of prayer can inspire and bless both those who govern and those who are governed. Such prayer, however, is not an impassioned plea for divine intervention in human affairs. In Christian Science it is a confident acknowledgment of the presence of God's unerring control. It's prayer based on a growing understanding of the spiritual nature of man and the universe under God's government. Writing in an article defending religious freedom against the unjust intervention of government, Mrs. Eddy writes, "Mankind will be God-governed in proportion as God's government becomes apparent, the Golden Rule utilized, and the rights of man and the liberty of conscience held sacred." The First Church of Christ, Scientist, and Miscellany, p. 222. 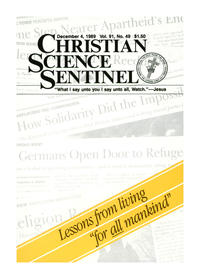