I watched a superbly acted drama entitled The Deadly Game by James Yaffe. As I recall it, the play involved three retired men of law who would meet each week after dinner to retry important legal cases in history. One winter's evening an unexpected guest arrives at the door, a traveler who seeks shelter from a snowstorm. The unsuspecting guest is invited to participate in the evening's mock trial by assuming the role of defendant. The cross-examination that follows constantly places the man on the defensive, until the "court" is convinced that he is responsible for the death of another person.

While watching the play, I realized the defendant never had a chance. There, in the mock courtroom, justice was synonymous with a finding of guilt, based on the premise that everyone has committed a crime at some point in life. This premise of essential guilt is well represented in the story of Adam and Eve. Predestined at the outset, mortal man is fatally flawed. 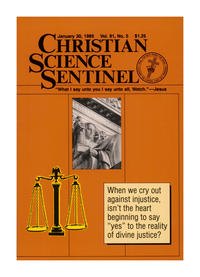