The numbers—what can they tell us?

Numbers—in the form of statistics—increasingly inform us of the world in which we live. In fact, there are so many statistical descriptions and comparisons of everything from trends in weather to trends in the economy that it's not so unusual to feel like rebelling against them all. And yet there are statistics that I've been unable to ignore and which make me think about the people behind the numbers.

Let me give you a couple of recent examples. Within the last year the world's population reached the five billion mark —doubling in little more than the last generation. Now I read that when the International Bulletin of Missionary Research went to press this year, the population had grown to an estimated 5,104,522,300. Martin E. Marty, "But Who's Counting?" The Christian Century, July 6–13, 1988, p. 655 . I can begin to understand something about changes in the world by thinking about that additional 104,522,300. This addition alone, which took place in just a few months, is equal to the entire population of the United States in 1920. And, I can almost totally grasp the fact of that last 300. That's about how many people I used to see at one of our high-school basketball games. 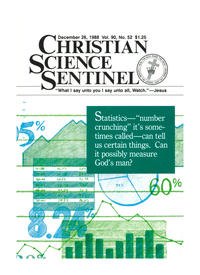