One day I started to move an engine hoist from my garage. While I was pulling the hoist over a raised threshold, the A-frame of the hoist slipped off the hydraulic lift and fell on my hands. Two fingers of each hand were pinned between the steel arms of the A-frame and the bed of the hoist at the fulcrum. With both hands caught, I was unable to lift the frame until prayer led me to stretch far forward and thrust my head under a crossbar. Then, with great effort, I lifted the frame enough to extract my fingers.

The fingers were badly cut and bruised; one was almost severed. I walked to the house and managed to telephone my wife. She said she would pray for me, and, of course, I prayed, too. There was no further pain, then or later.

Send a comment to the editors
NEXT IN THIS ISSUE
Testimony of Healing
The law of God is truly the only law operating; it is the law of... 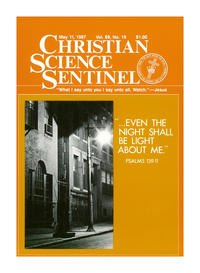