We have all read of the courage of men and women who have refused to compromise their worship of God even when expediency might have dictated a "safer" course of action. The Scriptures are full of such stories. One that stands out to Sunday School children and adults alike is the story of Shadrach, Meshach, and Abednego. See Dan., chap. 3 . These three Hebrew men had been made overseers in the province of Babylon, at the time of the captivity of the Jews, when Nebuchadnezzar was on the throne.

The king had set up an image of gold, and he expected all in his kingdom to obey his decree and worship this idol. Anyone who disobeyed would be thrown into a furnace. Even in the face of such a threat these men refused to comply. Their firm response to the king was "Our God whom we serve is able to deliver us from the burning fiery furnace, and he will deliver us out of thine hand, O king." 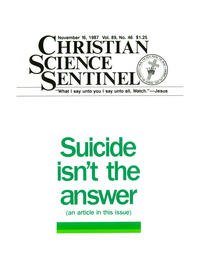