Persisting in prayer for racial harmony

with contributions from Beverly Lyle

During the week of the first nationwide United States holiday honoring Dr. Martin Luther King, Jr., Beverly Lyle watched with special interest a television review of the progress in civil rights since the 1965 Freedom March from Selma to Montgomery, Alabama. The discussion reminded her of her own private, prayerful marches along a small stretch of that same Selma road during the years of 1962 through 1964. She says the program made her see just how essential it is for her—for each of us—to be persistent in prayer for the solution of community challenges, even when those challenges seem overwhelming and beyond the scope of one individual's ability to bring about change.

In 1962 she had only recently moved to Selma from the state of Washington. She and her husband, an Air Force pilot, lived off base in modest rental housing in the country alongside the Selma–Montgomery highway. They were expecting their first child, and as a Christian Scientist, she was actively preparing for that birth by praying to understand more of the spiritual law that governs all creation. But she had not been in Selma very long before an incident occurred that made new demands on her prayer. 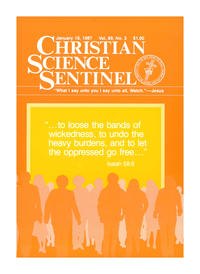