The possibilities of true womanhood

In a Christian Science Sunday School class I was teaching, which consisted of two sisters in their teens, we were discussing the concept of womanhood. After some lively discussion we concluded that the real identity of each woman as created by God is fully complete, including not only those good qualities that might usually be associated with womanhood but also those that might usually be associated with manhood. We agreed that demonstrating this true sense of completeness involves acknowledging and actively expressing spiritual qualities, such as love, joy, peace, strength, wisdom. It is in this way that we learn more of what Mrs. Eddy's statement in Science and Health implies for our lives right now: "Let the 'male and female' of God's creating appear." Science and Health, p. 249; see Gen. 1:27.

I related to the class how my mother had demonstrated this completeness of true womanhood during the depression days of the 1930's. It seemed that my father, no matter how hard he tried, could not obtain gainful employment during most of this period. This mother of four children had gained, through her study and practice of Christian Science, a deep and abiding faith that all things were possible to God. She soon obtained work as a seamstress in a laundry. She spent long hours in a building where little attempt was made to control temperature or humidity. This, coupled with rigorous demands at home, would have sapped the strength of many a strong man. She continued, however, day after day without ever being sick and, even more remarkably, without ever uttering complaint. Her womanly gentleness, compassion, and understanding never lessened as a result of having to assume what was at that time considered the male role in the household. 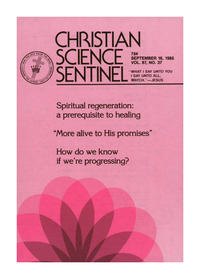