Many years ago I had a healing that illustrated...

Many years ago I had a healing that illustrated to me the truth of these statements in Science and Health with Key to the Scriptures by Mary Baker Eddy (p. 392): "The physical affirmation of disease should always be met with the mental negation" and "Stand porter at the door of thought. Admitting only such conclusions as you wish realized in bodily results, you will control yourself harmoniously."

One day, while walking through our town, I met a man I knew, who told me that his wife was in the hospital. He said that she had neuralgia, and he described the symptoms and pain. A few days later I began manifesting the same symptoms. This was shocking to me, a healthy young woman, but I also saw more clearly than ever before the mental nature of disease. I realized that because I had not mentally negated the vivid picture of disease described to me, I had in effect permitted this false but aggressive suggestion to control my experience.

Send a comment to the editors
NEXT IN THIS ISSUE
Testimony of Healing
At the time when our daughter-in-law was due to have her... 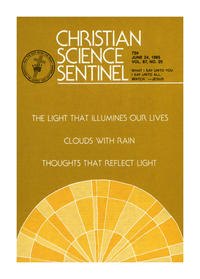