My gratitude for Christian Science is beyond measure

My gratitude for Christian Science is beyond measure. My childhood and young adulthood were sorely impressed with the limitations of material medicine—especially since it could not help my mother, who was a paraplegic. Later when I was married and my own seven-year-old son became severely ill, doctors were unable to help him. He lost much weight and had a large lump on his face and neck. Three doctors took test after test trying to find some way to heal the child, but he just kept getting worse. I was ready for a new look at life. It was then a neighbor said to me, "Why don't you try Christian Science?" 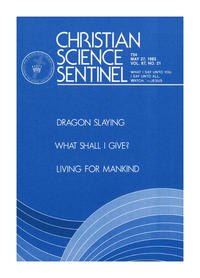