I wonder why it has taken me this long to relate some of the...

I wonder why it has taken me this long to relate some of the marvelous blessings and healings I have received through the practice of Christian Science. I would be lost without this Science, which has brought me a sense of completeness and joy.

When I was five years old I fell on the third rail of an elevated subway. My survival was considered to be a miracle, for I had been badly burned and received a severe electric shock. I was released from the hospital after six months, but my parents were told I would never be active again or be able to walk properly. I overheard this prognosis at the time it was made, and I must admit that it overwhelmed and discouraged me. 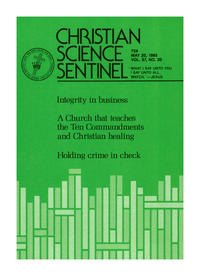