Knowing God in an age of change

We live in an age of vast and complex change. Books about social and technological revolution, counterrevolution, futurism, and fundamentalism abound. They indicate the discontent and uncertainty about change that are the focus of so much public and private attention.

The role of change is something that merits careful assessment by the Christian thinker. Mrs. Eddy, the Discoverer of Christian Science, was such a thinker, and she underwent tremendous change in her life. From her birth in the early 1800's to her passing in 1910, she, like others of her generation, was to see vast change take place in her own life and in the world. As a young bride, she lost her husband during a yellow fever epidemic and was left alone hundreds of miles from the rural New England countryside that had been her lifelong home. At the time of her husband's death, she was expecting a child. Her health had been failing, and eventually, because of her invalidism, her family decided she was unable to care for her son, and he was placed in the care of others. The loss of husband and child within a few short years, combined with poor health, were changes of tremendous magnitude for her. Their poignancy can be clearly felt when we read a few sentences from a biographical sketch in her book Retrospection and Introspection. 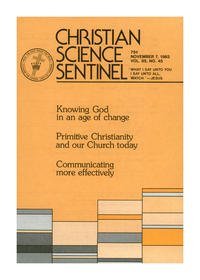