Use it or lose it

As preteens, my brother and I spent six months on a ranch near the Mexican border. In order to communicate with most of the workers and inhabitants, we needed at least a smattering of Spanish. Later on at the university, I had to include a foreign language in my schedule. Spanish was the line of least resistance, and with no special effort I made an A in the course.

There followed twenty-five or thirty years during which I had no occasion to read, write, or speak Spanish. Then, one day I picked up The Christian Science Monitor and started to read the religious article on The Home Forum page. That day the translation was in Spanish, and I thought it would be fun to test my memory. An hour later, having struggled through only part of the article, I gave up! Apparently, a better-than-average knowledge had been lost, simply through lack of use and demonstration. 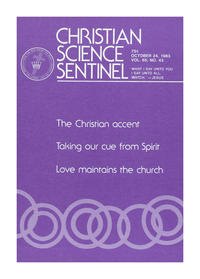