About five years ago, in early July, I was suddenly stricken with...

About five years ago, in early July, I was suddenly stricken with excruciating pain in my legs. For one week I was bedridden. I called a Christian Science practitioner for help, and she expressed much love. As a result of prayer, I was able to be on my feet in a week. However, full healing did not take place rapidly. I was getting around by myself but was limping noticeably. As hard as I tried, I could not get one foot to land correctly while I was walking, and it would slap abnormally on the ground.

The turning point came one day in September, when I was limping along in one of the shopping centers. Some time earlier the suggestion had come to me that the problem I'd had with my legs was going to leave me a cripple. Around that time I had read Mrs. Eddy's article entitled "Reminiscences" in The First Church of Christ, Scientist, and Miscellany. In speaking of her gradual emergence from dogma and creeds Mrs. Eddy states (p. 307): "The fallacy of materia medica, its lack of science, and the want of divinity in scholastic theology, had already dawned on me. My idealism, however, limped, for then it lacked Science."

Send a comment to the editors
NEXT IN THIS ISSUE
Testimony of Healing
During my childhood I witnessed the healing effect of Christian Science... 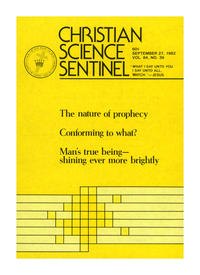