Some years ago I experienced a simple yet significant demonstration...

Some years ago I experienced a simple yet significant demonstration of the healing power of Christian Science. I had just been introduced to Science and had been reading Science and Health by Mrs. Eddy on and off for a short time. Then one day I read this statement on page 89: "Matter is neither intelligent nor creative." This whole concept was new to me, and I sat back for a moment to ponder its meaning. While doing that my attention was drawn to a wart I had on my hand. It was a large wart and had caused me some inconvenience and discomfort for several years. I reasoned, "If 'matter is neither intelligent nor creative,' how could it possibly make a wart?" Obviously, it couldn't. For several days I paid no more attention to the hand or to the wart. When I again thought of them, I was surprised to find that the wart had vanished. And it has not returned.

Later I applied for Primary class instruction in Christian Science and was accepted. The class was to be held in Boston. The time arrived and the class sessions began. After attending class on the fourth day, I returned to my lodgings in midafternoon. The building where I had rented a furnished apartment for my stay in Boston was surrounded by fire trucks and a Red Cross disaster unit. From all indications, the fire was out. But from where I was standing, I could not determine where in the building the fire had been. Weaving my way around the fire apparatus, I reached the front entrance. Several firemen were standing in the doorway. I told them I was a tenant and asked if I could go in. They said that it had been a three-alarm fire and that no one would be allowed in the building until at least the next day. I inquired where exactly the fire had been and was told that the fifth and sixth floors on the east side of the building were gutted. My apartment was on the sixth floor in that area.

Send a comment to the editors
NEXT IN THIS ISSUE
Testimony of Healing
I have been a member of The First Church of Christ, Scientist,... 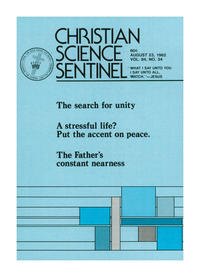