A startling question in Miscellaneous Writings by Mary Baker Eddy...

A startling question in Miscellaneous Writings by Mary Baker Eddy came to my attention shortly after I began to study Christian Science many years ago. It is (p. 52): "If this life is a dream not dispelled, but only changed, by death,—if one gets tired of it, why not commit suicide?" And suicide is just what I had been contemplating as a way to solve all the problems that seemed so real to me at that time—including the excessive use of alcohol. I had reasoned, at the beginning of World War II, that serving in the armed services would help correct a drinking habit of some years. But I quickly found that, instead of curing the drinking, being in the service only tended to contribute to its greater indulgence.

I studied a number of passages in Mrs. Eddy's writings on the subject of suicide. However, one particular sentence in her answer to the question mentioned earlier stood out to me. She writes (Mis., p. 53): "Committing suicide to dodge the question is not working it out." I then saw that instead of solving my problem, dodging the question would, in fact, compound it. I also realized that I knew very little about God, Life, and His eternality. When studying I had noticed the frequency of Mrs. Eddy's use of the phrase "here or hereafter" throughout her writings. Now I saw that the timing and method of working out the problem had to be from the standpoint of Life, not death, because Life was here, not just hereafter. Knowing suicide was no longer a solution, I felt a strength I had not drawn on before; and through study and prayer I was quickly and permanently freed from the desire for alcohol as well as tobacco. Also the suicidal urges left me.

Send a comment to the editors
NEXT IN THIS ISSUE
Testimony of Healing
When I was in my last semester in college, I realized that I had... 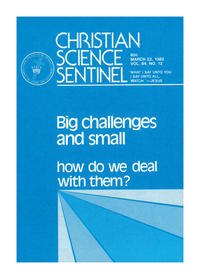