"In Him we live, move, and have being. Man's origin and existence being in Him, man is the ultimatum of perfection, and by no means the medium of imperfection. Immortal man is the eternal idea of Truth, that cannot lapse into a mortal belief or error concerning himself and his origin: he cannot get out of the focal distance of infinity" Miscellaneous Writings, p. 79; —Mary Baker Eddy's strong declaration. Clearly, nothing can go wrong with the real man.

What, then, gets healed and regenerated through Christian Science? Not actuality but belief: the belief that man lives in finity, not in infinity; in matter and not in divine Life; in a physical identity, not in Soul. It is not even man's mentality that gets healed, since man—according to the Christianly scientific definition of him—doesn't have a mentality separate from ever-perfect Mind and can't lapse into thinking erroneously about himself. 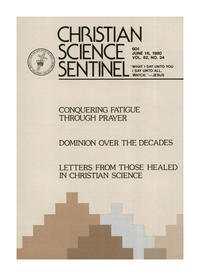