A few years ago, when I was seventy-two, I slipped while out...

A few years ago, when I was seventy-two, I slipped while out having luncheon and broke my hip. My cousin, who is not a Christian Scientist, called a surgeon, who was also dining there. He took me to a nearby hospital. An X-ray showed the break to be very serious, but the surgeon gave his consent for me to retire without a setting, a pin, or a cast. I remained in the hospital because the nearest nursing home for Christian Scientists was several hundred miles away.

A Christian Science practitioner was called to pray for me, and from then on I worked closely with her. No medication was given me, but I was free of pain and ate and slept well. I didn't turn on TV or the radio. Nor did I study anything except the Bible and Mrs. Eddy's writings. I also read hymns from the Christian Science Hymnal and pondered articles in the periodicals. Many statements of truth I had memorized over the years became part of my continuous prayer. 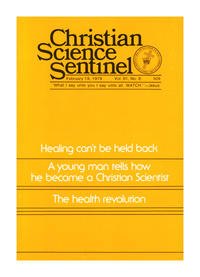