My mother heard of Christian Science when I was ten years old...

My mother heard of Christian Science when I was ten years old and began to tell me a little about it. But it was not until four years later that I came to England and was able to attend a Christian Science Sunday School. While still a student, I obtained a government secretarial post and was sent abroad. There, I suffered a severe attack of Spanish influenza at the time of an epidemic. That afternoon my chief remarked that if I was not well in the morning, he would report me to the medical center. I assured him that with Christian Science treatment I would be well by morning. This was proved to be so.

I was healed a few years later of malignant malaria in Hong Kong. Three medical officers had taken my husband aside and told him that if he did not compel me to go into hospital where I would be, in their view, properly looked after, they would assume that he was conniving at my murder. I was quickly healed through Christian Science treatment by a practitioner in London and had no subsequent attacks of this fever. 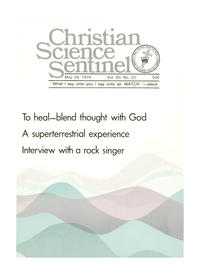