How grateful I am to have had Mrs. Eddy's writings presented...

How grateful I am to have had Mrs. Eddy's writings presented to me when I had been reaching out to find God. My future looked very dark and without hope, as my husband and I had decided to go our separate ways, and I was left with two small children to raise and educate. I loved the truths in these books that illumined the Bible for me. I was inspired with confidence, which led me into employment that financially met all our needs and enabled me to purchase a home of our own.

However, when my children reached their teens, and were at the most expensive stage of their education, I suffered what appeared to be a nervous breakdown. My decision to stay with Christian Science and trust God with the healing proved to be a very valuable one. There followed a deep and conscientious search to know God better. I asked to be released from my employment and took work as it came along, for the need was for quiet periods of rest at home, several months at a time. The Bible Lesson in the Christian Science Quarterly became my daily bread. Sometimes I read it twice or three times in one day. There were many times when I felt I could not go on, and would rather pass on than cope with the mental torture and physical disability I was faced with. Sleep only came for a few short hours each night. Often all I could think was, "Thank you, dear Father, for loving me." Mrs. Eddy says (Rudimental Divine Science, p. 17), "The Discoverer of this Science could tell you of timidity, of self-distrust, of friendlessness, toil, agonies, and victories, under which she needed miraculous vision to sustain her, when taking the first footsteps in this Science." The words of Mrs. Eddy's poem "Satisfied" (Poems, p. 79), "For storm or shine, pure peace is thine,/ Whate'er betide," stayed with me. For me pure peace came to mean "perfectly tuned mental calm," and I claimed this promise.

Send a comment to the editors
NEXT IN THIS ISSUE
Testimony of Healing
Many years ago my mother learned of Christian Science... 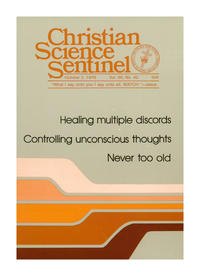