The conviction that God is all-power and that matter is really...

The conviction that God is all-power and that matter is really nothing—indeed, nonexistent—unfolds a little at a time through study, prayer, and practice of Christian Science. This conviction began in my life with a healing I had at the age of six. My mother, a longtime Christian Scientist, entered me in the Sunday School at age three when I was already eager to attend. There I learned the simple truths that God is Life and Love, and of the power of God that heals. I was told I was God's child.

After falling from a high place I became very ill. My father, who was not a Christian Scientist, asked that a doctor be called in to examine me. The case was diagnosed as blood poisoning, and the physician urged my parents to hospitalize me or he wouldn't be responsible for my survival. It was then and there that I refused any medical help and said I wanted only God's help. Mother prevailed upon Dad to let her call a Christian Science practitioner to treat me through prayer. 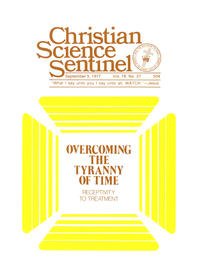