No reality in Spirit's opposite

How to Deal With the Nuclear Threat

In 1898 the great French physicist Marie Curie coined the word "radioactivity." Interestingly, the same year the Discoverer and Founder of Christian Science, Mary Baker Eddy, drew up the twenty-six subjects that comprise the Bible Lessons In the Christian Science Quarterly; studied daily by Christian Scientists and read weekly in Christian Science churches throughout the world. One of these topics is, "Is the Universe, Including Man, Evolved by Atomic Force?"

How strange and unconventional that must have seemed seventy-nine years ago! Thirteen years were to pass before Lord Rutherford, the New Zealand-born physicist, working mainly in Manchester, England, first established the nuclear nature of the atom. And forty-seven years were to pass before the atomic bomb was dropped on Hiroshima, Japan. But there were prescience and inspiration behind Mrs. Eddy's choice of atomic force as one of the weekly Bible Lessons: in the intervening years mankind has come to live under the threat of atomic or nuclear proliferation.

Send a comment to the editors
NEXT IN THIS ISSUE
Article
The Power of Christian Science - Do We Recognize It? 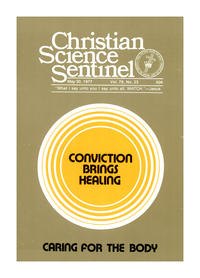