"In the material world, thought has brought to light with great rapidity many useful wonders," Science and Health, p. 268; comments Mrs. Eddy in Science and Health. She was writing at a time when the potential of electricity was beginning to dawn on humanity, and the possibilities of the internal combustion engine had been glimpsed—though only the most perceptive visionaries could have foreseen that in less than a century it would be so far developed that it would enable mankind to travel faster than sound. Nuclear energy had yet to be discovered.

In her lifetime Mrs. Eddy, the revelator of the Science of Mind, saw the emergence of incredible new material knowledge and of a fresh world of hitherto unimagined wonders resulting from it. When asked what was her attitude to such material inventions, she replied: "Oh, we cannot oppose them. They all tend to newer, finer, more etherealized ways of living. They seek the finer essences. They light the way to the Church of Christ. We use them, we make them our figures of speech. They are preparing the way for us." The First Church of Christ, Scientist, and Miscellany, p. 345; 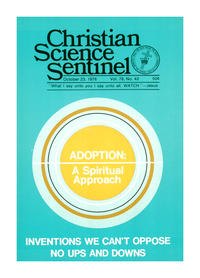