When one of our children was a few days old, a birthmark appeared...

When one of our children was a few days old, a birthmark appeared on the face of the child. Earnest knowing of the truth, as well as treatment by a Christian Science practitioner, did not change the appearance, and months went by. A brother, not a Christian Scientist, one day advised us that in fairness to the child we should have the mark removed by a skin specialist. We took the child to a doctor highly regarded in that field. After examining the mark he said it could be removed. I then asked, "But might the mark not disappear of itself over a period of time?" He replied it would be impossible. He also said removal of the birthmark would leave a slight scar.

Like a flash there came to my thought the words in the Bible (Heb. 4:12): "The word of God is quick, and powerful, and sharper than any twoedged sword." As we left the doctor's office I knew that we would not return. It seemed clear that no blemish belonged on the face of that pure child, nor any trace of one.

Send a comment to the editors
NEXT IN THIS ISSUE
Testimony of Healing
Shortly before our youngest child was born, the doctor who... 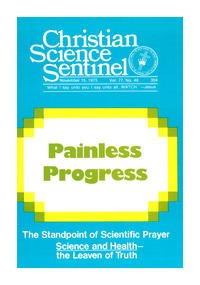