My brother was healed of tuberculosis with Christian Science...

My brother was healed of tuberculosis with Christian Science treatment after he had been given up by physicians. At the time of his healing I was still a child. For several years after that wonderful experience we attended services at the local Church of Christ, Scientist. We moved to another state in a rural area, where there was no church to attend. Even though we joined and became active in a local Protestant church, we had a deep love for what we had learned in Christian Science in the earlier years.

As a wife and mother, because my husband and children were very precious to me, I wanted to give them the best. I knew I could find it in Christian Science. Then we moved to a city, and as soon as I could qualify for membership in the branch church located there and in The Mother Church, I joined both. This involved not only relying on God for physical healing but being healed of smoking and of social drinking.

Send a comment to the editors
NEXT IN THIS ISSUE
Testimony of Healing
I wish to add my "Thank You, God" to the countless expressions... 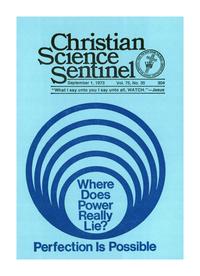