If someone were to overhear a mother assuring Her frightened child who had just awakened from a bad dream that it never happened, he would not dispute the truth of such a statement. Yet he might find the same words surprising, perhaps difficult to understand, when spoken after the occurrence of an accident. Nevertheless, they have a scientifically demonstrable basis, and have been proved true countless times.

Scriptural authority for denying the reality of an accident is found in the first chapter of Genesis, which says plainly that God made man in His image and likeness. Because man is God's reflection, he is spiritual, perfect. Man's real being has never been material or subject to mortal beliefs of chance and accident. He has never been apart from his divine source, God, for a moment. The Psalmist sang, "Lord, thou hast been our dwelling place in all generations." Ps. 90:1; It is for this very reason that one is eternally immune to accidents of any kind. Spiritual existence is the reality, the belief of life in matter is the dream. As a divine idea dwelling in God, man is and always has been preserved by His unerring laws of order, safety, harmony, and invulnerability to harm. 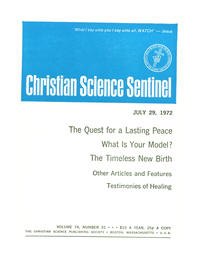