The Bible relates Christ Jesus' healing of a demoniac, that is, an insane man thought by the people to be possessed by a devil, or evil spirit. In this individual it appears that there were many so-called devils, for in reply to Jesus' question he said that his name was Legion, for many devils were in him.

A useful definition of "devil" is given by Mary Baker Eddy, the Discoverer and Founder of Christian Science, in Science and Health with Key to the Scriptures. Part of this definition reads, "Evil; a lie; error; neither corporeality nor mind; the opposite of Truth; a belief in sin, sickness, and death; animal magnetism or hypnotism." Science and Health, p. 584; 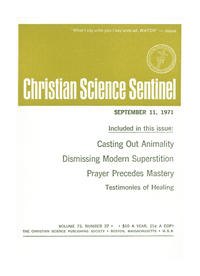