A friend of mine once asked a hypnotist whether he could possibly be hypnotized if he refused his consent. The hypnotist promised to show him. He warned my friend to keep knowing a fact, such as an arithmetical equation, regardless of what was done or said. My friend agreed, and began thinking 2X2=4. All was quiet. Presently the hypnotist asked my friend to hand him a stick from a shelf at the back of the room. My friend turned—and instantly felt himself transformed into a creature so large that he could not go through a door or sit in a chair. After a while he became conscious once again that he was actually sitting at the hypnotist's desk. "What happened?" he asked in surprise. The man smiled. "You forgot to know your fact," he replied.

Christian Science teaches the importance of keeping thought spiritually factual. This means rejecting sense testimony, which is not based upon knowledge of God, and recognizing the spiritual nature of man and the universe as creations of divine Mind. Taking its stand upon the true concept of the allness of God and His perfect creation and the nothingness of evil, Christian Science declares any lapse from perfection and harmony to be illusion. 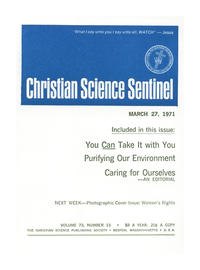