This is a time of tremendous technical progress in human society. Some obstructions that for centuries have hindered mankind's emancipation have been leveled or are crumbling away. Even the concepts of time and distance have undergone such startling changes that the universe seems to be yielding its secrets.

But what about the social barriers that humanity itself has allowed to hamper progress? Are they, too, being overcome? We see such obstacles in the barriers between different social classes, races, and religions that cause one to ask how existing dissension can ever be replaced by unity. One can point with some satisfaction to steps toward unity that have already been taken: a movement toward greater unity among the churches, an urge to bring about equality among the races and to level barriers between social classes, and a tendency for preoccupation with national affairs to yield to matters of world concern. We can be grateful to see these indications of progress. 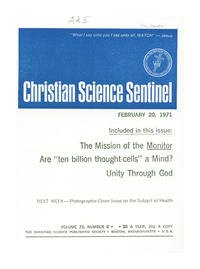