Remember the Daughters of Zelophehad!

Did you know that even Moses recognized that women have rights? Of course, his concept of women's rights wasn't as advanced as today's. But, still, he was one of the first lawgivers to grant women property and inheritance rights in certain circumstances.

It seems that after Zelophehad died, his five daughters realized they wouldn't get any of the property to be distributed in the Promised Land. Custom decreed that if a father died leaving no male heir, his property went to the closest male relative—leaving his daughters without an inheritance. So Mahlah, Noah, Hoglah, Milcah, and Tirzah marched before Moses and stated their case. We read in the book of Numbers, "And the Lord spake unto Moses, saying, The daughters of Zelophehad speak right." Num. 27:6, 7; So they won a fair judgment that became law among the twelve tribes of Israel. Today this case is still cited as legal precedent and authority.

Send a comment to the editors
NEXT IN THIS ISSUE
Editorial
Why Read the Bible? 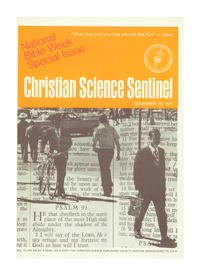