[The above is an abbreviated, postproduction text of the program released for broadcast the week of June 19-25 in the radio series, "The Bible Speaks to You." Heard internationally over more than 1,000 stations, the weekly programs are prepared and produced by the Christian Science Committee on Publication, Christian Science Center, Boston, Massachusetts, U.S.A. 02115.]

[The participants are John Lewis Selover and Marni Politte]

Politte: There is so much crime these days that people are disturbed and frightened by it. They cannot understand why there are so many crimes against the person, why people seem to feel a need to hurt other people.Selover: Often criminal acts of this kind represent a lashing out against poverty, discrimination, injustice, or frustration. But they certainly cannot be regarded as normal. There really is something we all can do about it. It's not enough to try to contain crime by dealing merely with its symptoms. The underlying causes need to be corrected. 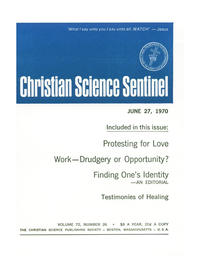