Do Not Deviate from Your Course

A friend of mine decided to check the compass on his pleasure cruiser by running a course to an island some miles distant. When the island appeared on the horizon, it was far to the east—the boat was not on proper course. As he glanced about, he suddenly saw a small metal box near the instrument. This, he realized, had modified the magnetic field, causing an appreciable deviation from the intended track. Relieved that the fault was not in the instrument, my friend headed for the island. But he had to pick his way slowly and carefully through the various shoals and shallows separating him from it—obstacles that would not have presented themselves had he been on the correct course.

For the writer, this incident pointed to a valuable lesson in Christian Science. Our goals are spiritual progress and healing. We cannot at the moment see the havens toward which we are sailing, but we set our course according to divine Principle and carefully follow it. If we are constantly alert for any deviation of material sense that tries to present itself, and make the proper correction immediately, we more quickly reach our destinations. Mrs. Eddy says, "Strict adherence to the divine Principle and rules of the scientific method has secured the only success of the students of Christian Science." Science and Health, p. 456; 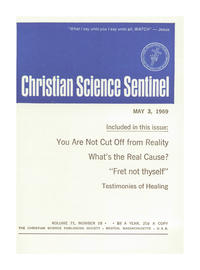