Admitting the facts means something quite different to the Christian Scientist than it does to the materialist. The Scientist finds that reality rests on a spiritual basis. It expresses the nature of the infinite creative power which is God, and it cannot vary from its perfect origin. Man, in the likeness of God, must forever reflect the order, harmony, and wholeness of his divine Principle or cause. In Christian Science one learns to base his prayer on spiritual understanding, on a grasp of the facts of real being. Prayer is not an invitation to miraculous intervention but a search after truth and an application of law.

It is becoming clearer than ever before that material sense evidence does not represent fundamental reality. Rather, it manifests temporary belief, a state of mortal thought. The material universe and man are counterfeits of the real creation, and they present human concepts rather than facts. These are subject to correction and control when one understands the truth of being. He can find that he is not impressed with sense testimony, for he knows that it is without a real cause. It was quite evident that Christ Jesus saw beyond the crippled appearance, the evidence of leprosy, the apparent blindness and incapacity. He saw the reality of man in God's likeness, and his understanding of Truth enabled him to restore the human being to wholeness.

Send a comment to the editors
NEXT IN THIS ISSUE
Testimony of Healing
The Christian Science textbook, Science and Health with Key to the Scriptures... 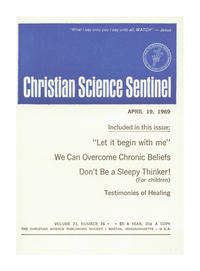