About a year ago I felt something hard on the sole of my foot. It had been hurting quite a bit for some time, but I had paid no attention to it. I looked at my foot and saw what appeared to be a growth of hard skin. I put some plaster on it, and I did not bother about it until I found that these patches of skin seemed to be appearing in several places on both my feet. I was away at school when this happened, and I wrote to a Christian Science practitioner and asked for help.

At first the hard patches on my feet seemed to grow all the time, and were sometimes very painful. I knew that Christian Science always heals, and together with the practitioner I stayed obediently with the truth that God's individual ideas are pure and unblemished, and that evil could not touch or harm me. I had to miss swimming during the first part of the summer term, though later I was allowed to swim with rubber shoes on. It was nice being able to swim again, but it was a nuisance having to wear shoes.

Send a comment to the editors
NEXT IN THIS ISSUE
Testimony of Healing
In Miscellaneous Writings Mrs. Eddy writes (p. 307), "God gives... 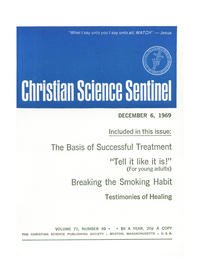