I had heard of Christian Science as I was growing up, but like...

I had heard of Christian Science as I was growing up, but like so many who have not studied it, what I thought I knew about it was erroneous. When our younger son was nine, I turned to it as a last resort. He had a critical breathing difficulty that made him fight for breath. After exertion there were times when he had to bend over in an effort to breathe.

One doctor told us we should take him to Arizona immediately because his lungs were affected. Another doctor told us the trouble was a nervous condition he would have all his life and that nothing could be done for him. Both verdicts were harsh, and we could not bring ourselves to accept them. 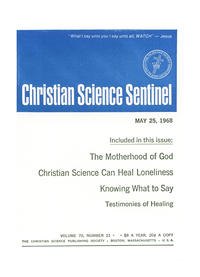