A Time to "stand still"

Every human being has problems he is trying to solve. In fact, it sometimes seems that human experience consists of a series of problems, leaving little time in between when one can be peaceful. The student of Christian Science is in a position to do something about this situation, for he has the grand truths of existence with which to keep his thinking clear. His experience can acquire much serenity. He will still have problems, but he will be encouraged by the knowledge that his prayers, based on an understanding of the perfection of God and of His reflection, man, will lead him to a constructive and satisfactory solution of them. He knows that the answer comes when he is quiet, listening for his heavenly Father's voice. As Mrs. Eddy says, "Spirit, God, is heard when the senses are silent." Science and Health, p. 89; These moments of quiet communion with God are an important part of each student's progressive experience, and he cherishes them.

An attorney, who is a student of Christian Science, had an experience which was very valuable in showing him the importance of listening and then standing firm. He was returning to his office by cab after a weekend spent in developing some very important notes. He hurriedly got out of the cab at a busy intersection and left the papers with his notes on the seat. He realized his error too late as he helplessly watched the cab disappear down the street. Despondently he started into the building where his office was located, and then changed his mind and decided to stand there and pray a moment. 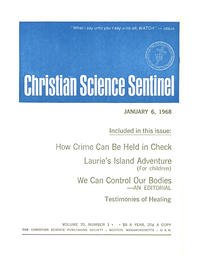